There, I am now sitting at the bedside of this ‘’little big’’ man whose time on earth is coming to an end. A film is playing before my inner eye. I can still recall exactly, it was seven years ago, at that time I was standing at the 12th floor, looking out, when a quiet voice inside me (God) said, “Wait.” So, I waited until, after quite a while, Bernhard’s distinctive voice rang out across the hallway, “Come in quickly, the ambulance will be here in 10 minutes to pick me up!” We didn’t have much time left. After Bernhard’s diagnosis (COP 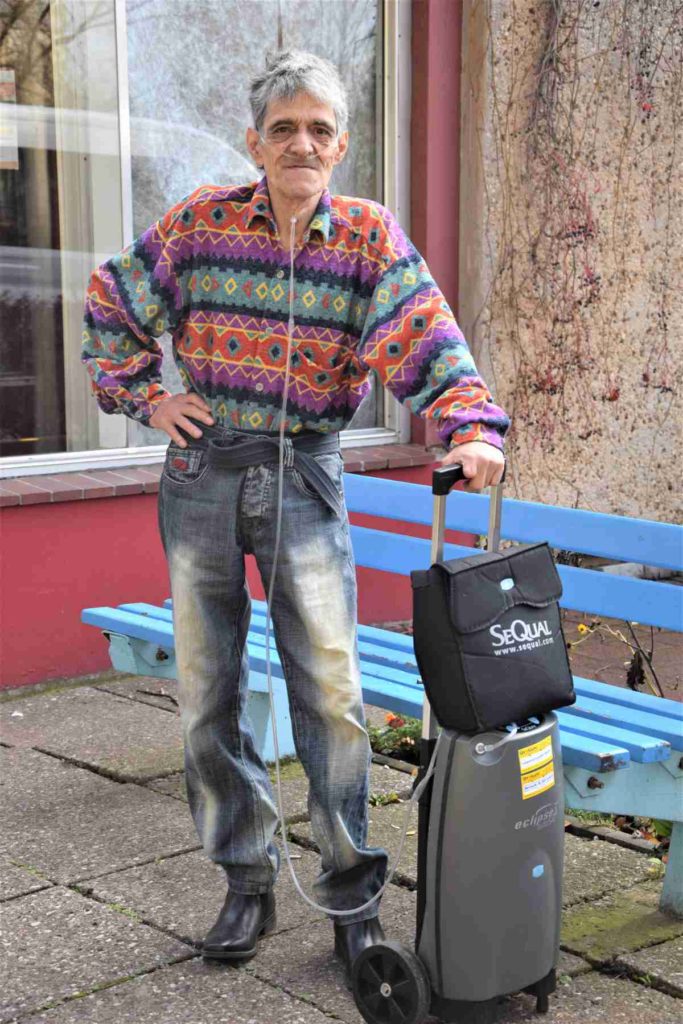 ng to open my life to JesD lung disease), it was questionable how much time to live is left with. So, we were talking over a cup coffee when Bernard said seriously: ‘’I am glorious Christ and let him into my heart, but not because you have said so, but because it is the decision have made.’’

Autonomy was an important value for Bernhard throughout his life. Influenced by his many years as a circus actor, Bernhard was a very special and unique person. His devotion to the various fellowship we had at the Anders was unquestionable and his heart reached beyond the Red Mountain. My desire was to go on a sermon tour with my dear friend Bernhard. Because this little man, constantly gasping for breath, helpless without oxygen machine, touched the hearts of many people. He was also able to make decisions. Though not all decisions in his life had been wise and that he had not been able to turn back the wheel, Bernhard had suffered until the end.

Nevertheless, despite all the challenges our beloved brother went though, the Psalmist words which was always important in Bernhard’s life remained true. ‘’The Lord is my shepherd’’. The psalmist words encouraged and comforted Bernhard every time as it was a journey of trusting the Lord for him. On January 12, he had written in a text message: “Yes, that’s God, even if it’s hard sometimes. I have to slowly learn again to trust Him unconditionally. I know that nothing is impossible for Him and that His way is different from what we imagine. I am finally in good spirits again. Even the nurses noticed that.” That’s how Bernhard was, real, imperfect, one of us.

Editor’s note: For us as a team, it was important and precious to have Bernhard accompanied by Andreas in the last few metres. As a community and friends of Bernhard we took time to pray for them as we waited for the new that our dear brother Bernhard is in heaven. Thank be to God that he granted us the privilege that we can share our lives with Bernhard.

‘’For you have snatched me from death, kept my feet from stumbling, That I may walk before God in the light of the living.’’  Psalm 56:14